A native of South Carolina, NATALIE PARKER is currently the Principal Clarinet of the San Francisco Ballet Orchestra. She joined the Ballet Orchestra in January 2012 and received her M.M. degree from Rice University’s Shepherd School of Music the following May. Natalie has recently attended such music festivals as Orchestra Institute Napa Valley, Music in the Mountains, Brevard Music Center, the Madeline Island Chamber Music Camp, and the Texas Music Festival. While in school, she actively participated in the Houston Da Camera Young Artist’s Program and JUMP!, the community music outreach program at Rice University. In 2010, she won second prize in the International Clarinet Association’s Young Artist Competition and performed in recital at their annual ClarinetFest. Since arriving in San Francisco, Natalie has played frequently with the San Francisco Symphony as well as with several regional orchestras and enjoys performing chamber music throughout the Bay Area.

DAN FLANAGAN currently serves as Concertmaster of the Sacramento Philharmonic and Opera, the Modesto Symphony, Lecturer of Violin at U.C. Davis, and Instructor of Violin at U.C. Berkeley. Described as a “stellar musician” (Nevada Reviews), he has been praised for his “exquisite tone” and “forthright brio” (Sacramento Bee). A dedicated orchestral player, he has performed as concertmaster with the Oakland East Bay Symphony, the California Symphony, California Musical Theater, the Festival Opera of Walnut Creek, and Symphony Silicon Valley. Dan has played as soloist with the Sacramento Philharmonic, the American River Chamber Orchestra, Bear Valley Symphony, Reno Baroque Ensemble, and the Adelphi Chamber Orchestra. As a chamber musician, he has performed with the Chamber Music Society of Sacramento, the Oregon Bach Festival, Chamber Music Alive!, Eco Ensemble, and at Chico State University, University of the Pacific, U.C. Davis, and U.C. Berkeley. Born in New Jersey and trained in New York and Michigan, he holds a B.M. from the Cleveland Institute of Music and M.M. from the University of Oregon, where he was a graduate teaching fellow. His teachers include Linda Cerone, Charles Castleman and Fritz Gearhart. 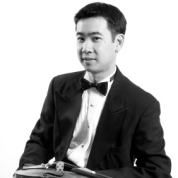 San Jose native MATTHEW OSHIDA has performed with orchestras throughout the country including the San Jose Symphony, Utah Symphony, Huntsville Symphony, Sarasota Opera, and Tulsa Symphony, Opera, and Ballet. He has appeared in principal positions with the orchestras in Berkeley, Fremont, Sacramento, San Jose, and Modesto, recorded with the Mormon Tabernacle Choir, and accompanied such popular artists as Sarah Brightman, Michael Bolton, Trans-Siberian Orchestra, Mannheim Steamroller, and Harry Connick, Jr. As a chamber musician, he studied with members of the Cleveland and Juilliard Quartets, performed with members of the Emerson Quartet, and participated in live broadcasts for BBC Radio 3. Outside of the concert hall, he has demonstrated the link between music and leadership through performing at training seminars for executives at such companies as eBay, Chevron, Intel, WPP, and Protiviti. His principal teachers include Franco Gulli and Igor Gruppman on violin and Katherine Murdock on viola. His music festival participation includes the Aldeburgh Festival, Britten Festival, AIMS Festival, Mendocino Music Festival, Monterey Jazz Festival, Cabrillo Festival of Contemporary Music, Midsummer Mozart, and Music in the Mountains. He received a B.M. from Indiana University and M.M. from SUNY Stony Brook.

An active Bay Area violist, ELIZABETH PRIOR is Principal Violist with the Santa Rosa Symphony and is a season substitute with the San Francisco Ballet Orchestra. She is also associate principal with the Marin Symphony and performs regularly with the San Francisco Opera Orchestra, the New Century Chamber Orchestra, and the San Francisco Symphony. Other orchestral credits include Freiburg Philharmonic as Associate Principal and Cape Town Symphony. She has toured and worked with Südwestfunk, Stuttgart Radio, Basel Symphony, and the Mannheim Opera Orchestras. A native of South Africa, she was a prizewinner in the International String Competition in Pretoria and gave her debut at Carnegie Hall with the Russian Chamber Orchestra. She tours regularly as a soloist with the Chamber Ensemble of Cologne in France and has done two recent tours with the New Century Chamber Orchestra. Other engagements include Amelia Island Chamber Music Festival, Sun Valley Summer Symphony, Midsummer Mozart, and Chamber Music San Francisco. She performed regular viola recitals for 13 years with Maestro Donald Runnicles accompanying on the piano.

JONAH KIM made his solo debut with Wolfgang Sawallisch and the Philadelphia Orchestra in 2003. The same year, he also appeared with the National Symphony Orchestra in DC where the Washington Post called him simply, “the next Yo-Yo Ma.” He graduated from the prestigious Curtis Institute in the spring of 2006 while only 17 years old, and has soloed with the Philadelphia Orchestra, National Symphony Orchestra, New Philharmonia, Symphony of the Americas, Orquestra Sinfônica Nacional and many others. Mr. Kim’s recitals at venues like the Kimmel Center, Kravis Center, Kennedy Center, the Phillips Collections and the Arsht Center have been streamed live and re-aired on podcasts, radio and TV programs for WETA, WHYY, WITF, MPBN, WXEL, NPR, NBC, CBS and PBS. In addition, he has played in live concert with pop figures such as the Beach Boys, Andrea Bocelli, Vic Damone, Regis Philban, Kenny Rogers, and the Trans-Siberian Orchestra. Currently, he is Associate Principal Cello of the San Francisco Ballet Orchestra, of which he is also the youngest member.